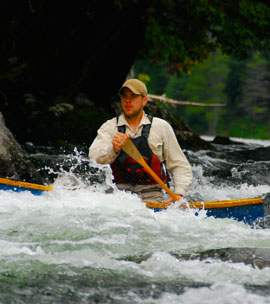 Nick first set foot on the island as a camper in 1991. He progressed through the tripping program and had his own thirty-two day trip of a lifetime on the Albany River in 1995. Nick returned to Camp Temagami as a guide after earning a B.A. in Business Administration from Rhodes College in Memphis, Tennessee.

Nick has paddled over 8,000 km across some of Canada’s most picturesque wilderness. His travels with the camp include five trips to James Bay, two long trips in Labrador, two trips on the Coulonge River, two trips on the Spanish River, and numerous trips throughout the Temagami area.

Nick has experience working with youth in the field as a Camp Temagami guide and teaching young adults in the classroom. He has earned Masters degrees in Economics and Parks, Recreation, and Tourism Management from North Carolina State University. In conjunction with his studies, Nick has taught university classes in economics and outdoor recreation leadership.

Nick became a Camp Temagami Owner in 2015. He spends 4 months in Temagami each camping season and works full-time during the off-season in Raleigh, North Carolina as the Camp Temagami Director.